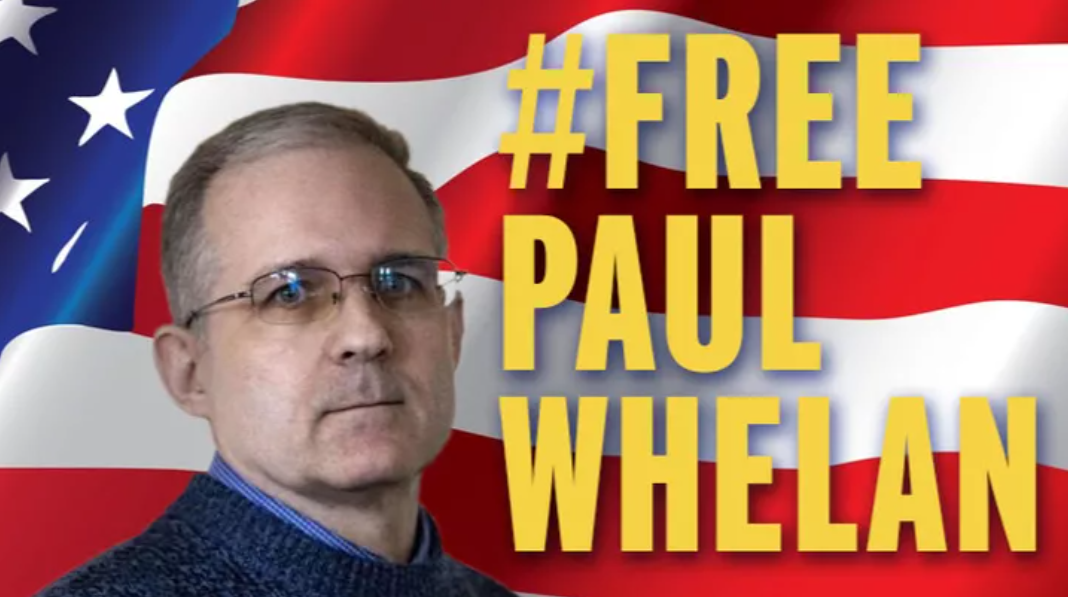 I just received this news from Paul Whelan’s mom:

Mail already en route is likely to be stamped ‘Service suspended’ and returned to sender.”

Thanks to the many of you who have sent letters. Based on this notice, some of your letters may be returned to you. If you might, hold onto them until this ban is lifted. I will keep you posted on any new developments.

Please continue your earnest prayers for Paul’s safety and to ease his loneliness as this lifeline to the outside world is suspended.

Love to all,
Kathy Daly

This update was posted today by Paul Whelan’s sister, Elizabeth: it contains the hard news about mail suspension to Paul, and also a heartening act of humanity as Paul saved a fellow prisoner’s life this week.As he requests, please continue to write to him, but do not post the letters until the status changes for mail delivery there, or-and for this we pray- that he is released and will have the comfort of knowing when he gets home that we continued to care about him even as our letters could not be delivered.

Hi,
I wanted to give you an update on Paul Whelan. First, thanks to your help, we were able to send funds to a Russian dentist in Mordovia to pay for much-needed dental work for Paul – can you imagine having to get this done at a prison camp! But a traveling dentist will do the work, and now it won’t become an emergency situation. Such a relief.

And the US Embassy in Moscow was able to send off a large box of food and supplies to Paul last week. They are being blocked from visiting him (or any other Americans) in person right now, so this will be very welcome.

I have two updates for you – one annoying if understandable one: USPS is not delivering mail to Russia right now, so we can’t even get letters to him via the Embassy. More on this below.

But the second update is more uplifting – Paul was able to save a life last week at the prison! Let me tell you about that before we get to the mail issue.

On Wednesday, March 9, Paul Whelan woke to find a young Russian prisoner unresponsive and bleeding in the barracks. The man had tried to commit suicide.

The prisoner had lost a pint or two of blood. Paul, an American Red Cross First Aid and CPR instructor, didn’t have a first aid kit or supplies (which are banned by barrack rules) but jumped in using what he had available from his own materials to triage and treat the Russian prisoner.

Although prison guards arrived, they wouldn’t assist, and doctors refused to attend the scene.

Paul, along with some other prisoners, carried the patient in a blanket across the snow to a doctor in the administration building. The prisoner survived and is currently recovering at a hospital camp.

I am so proud of my brother that even though he is being held on false charges and has suffered so much over these past 3 years at the hands of the Russians, Paul could still find it in his heart to save the life of a fellow prisoner, regardless of national origin, religion, or world politics. As Paul said, that is the foundation of human rights.

Okay, now for the mail issue:
If you have been writing to Paul Whelan, we just found out that as of last Friday, the USPS is stopping all mail service to Russia. This was an unwelcome surprise as we had thought the prison address would still work, with mail going by sea and rail. But, no!

According to their website, the USPS halted its international mail services to Russia on March 11. The agency said it had suspended certain services “due to unavailable transportation as a result of widespread cancellations and restrictions” within Russia. Mail already en route is likely to be stamped ‘Service suspended’ and returned to sender.

We were able to tell Paul this afternoon when he made a call to our parents so that he knows why letters suddenly stop arriving.

BUT! Paul asked us to share a message with everyone — keep writing to him anyway, and just hold on to the letters! One day either the service will resume, or he will be home, and he said he will be glad to read the letters either way. 🙂

Thanks again for your support for Paul. He is keeping his spirits up through this ordeal, and you have helped make that possible!