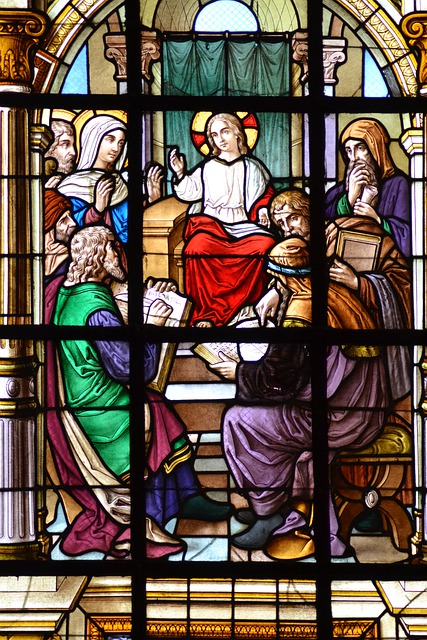 I don’t know if this will resonate with anyone else, but the last two years have done a number on a couple different parts of my brain, especially how I use words. On top of the stress and isolation and online communication weirdnesses of the pandemic, I’ve spent a good part of the last two years either sleep deprived with a baby or spending hours a day with a toddler saying, “yes, that IS a truck!” over and over again.

So what that looks like for me is that sometimes my language is really vague, and I forget to use a word that’s actually totally necessary to making myself known. I’ll make a request of Myles like, “We need to buy some more of those things,” or “can you bring the thing over here?” and he’ll be like, “sure, but I need to know what the thing is!” This might be particularly difficult because he is a copyeditor, and really likes for all the antecedents to be properly in place in a sentence, but sometimes, for me, they are nowhere to be found!

So I laughed when I read a commentary about this week’s Gospel- it could be that the author of Luke was having a similar problem when he wrote it. Perhaps you can remember other translations you’ve heard of this famous line that we read today, when Jesus says to his parents, “Did you not know that I must be in my Father’s house?”

These are the first words we hear from Jesus in this Gospel, and they seem important. But according to this commentator, O. Wesley Allen, Jr., the sentence in Greek is totally ambiguous. In Greek, it reads something like- didn’t you know that it is necessary that I be in my Father’s things? And things could be talking about being in the temple, or being among my Father’s people, or being about my Father’s business. Different translators over time have translated this sentence quite differently, depending on what they thought it meant.

Having written down all these rich stories about the months before Jesus’ birth, and Jesus’ infancy, the beautiful stories we have read and read and interpreted and acted out and meditated on, maybe the author of this Gospel was just kind of tired, and so didn’t do a great job on making their intention known. “You know, Jesus says he was about his Father’s things! You know what I mean!”

This commentator, Allen, though, suggests that maybe the ambiguity is on purpose. Maybe Jesus’ parents, who later told this story, were still coming to understand what Jesus meant and who Jesus was, just like all of us are. Or maybe there’s a purpose in the story to reminding us as readers that Jesus was also coming to understand who he was here, that his vocation and purpose were emerging, to himself as well as the world around him. Things are still not perfectly defined, in the messy process of figuring these big questions out, for Jesus, for his community, and for us.

Because this is part of the incarnation too- that Jesus didn’t just join us as a perfect glowing baby with a pamphlet that held all the answers, Jesus joined us as a human who learned and grew. One of my favorite images of Jesus is from a stained glass window, playing with little wooden blocks- a carpenter’s son!

I also play with blocks a lot these days, and the thing about blocks is that they’re wonderful, and fun, and you can build almost anything with them. And yet there’s a lot of learning and experimentation with them- testing out the balance of which blocks will hold the others, testing the limits of height and dimension. And of course, they fall down! They fall down all the time. Sometimes it’s fun when they fall down, and sometimes it’s so sad, and often you learn something from the process before you start again.

And so it seems like we meet Jesus at the end of his childhood, here, to see how he is coming to understand himself, and how his community is coming to understand him, as someone who is somehow human and also sent by God. He is a full participant in his community’s life and culture and traditions; his parents are doing their best by him, raising him with a strong spiritual and religious practice as a Jewish child, bringing him to the temple to participate in the Passover, teaching him about the Scriptures. It is his listening and his questions that seem to impress the leaders and teachers he encounters at the temple- he doesn’t stand up and give a sermon here, he is in dialogue, in relationship.

And there’s more than a hint of a 12-year-old stage of development here too- he gets lost, he disobeys his parents, he doesn’t apologize for worrying them, he is kind of sarcastic with them in this one ambiguous line that he says. He is growing, going through the stages that we all go through- the amazing, God-given vocation emerging, with all the messiness and fits and starts that anything emerging ever has.

It makes me think of a kid I knew around this age- maybe a little older. He was part of the youth pilgrimage that I ran for a number of years, and he went to the church I served at for 18 months, so I knew him pretty well. He was usually a funny and gregarious and good-natured person- always including people and expressing gratitude, and he loved to talk about God and how much he loved other people. He was a little like a golden retriever, bounding up to talk about some big question, and then bounding off to play basketball.

The pilgrimage was pretty intense- we talked and learned about big issues like racial injustice and climate change and social action. The second year he went, he spent the first 5 days of the week being uncharacteristically grumpy and even a little mean- causing disruptions, not listening when people asked him to do something, being slightly sneaky, making messes. He kept freaking out whenever we’d start a session and disrupting the whole group because he couldn’t find his journal, small stuff like that, but something was wrong. We tried in different ways to ask him what was going on, but he avoided us, especially the people he had a particular bond with. We were worried about him, not sure what was going on.

Finally, on the last day, he was sitting with a couple of people and he pulled a bunch of sticky notes out of his pocket. He’d been writing poetry all week- little poems processing what we’d been talking about, his faith, big questions about the world and its troubles. All of them jumbled up in a bunch of crumpled sticky notes in his pocket, because when you’re thinking big

thoughts and feeling big feelings like those, it’s hard to keep track of a journal to keep them in. After he started letting people in to all that was going on, he perked up, back to his old self, but having grown some too- a little closer to the person he was becoming, to whatever vocation God has for him, now and in the future.

We tend not to be okay with our own messy process of learning and growing, I think. We’d rather have growth happen in a straight line, in a predictable way, both for ourselves and especially for the people around us. Or we’d rather not have to learn at all, but just exist in an already perfect and unlightened state. But that’s not a thing- learning and growing happens by fits and starts, and takes roundabout tangents, and it often makes us kind of irritated and out of sorts. We try things out, and the blocks fall down, and we pick them up and start again.

That’s why I think this glimpse that the author of Luke gives us, in all its ambiguity, is such a gift. Jesus joins us in this messy and human process of learning and growth, lives it with us, sanctifies it in a new way. Maybe it’s especially a gift at this time of year of resolutions and trying to control things- we can learn, but learning isn’t the same thing as control or perfection.

There’s wisdom in this gift of a story, I think, in that the actual process of human learning, in all its messiness and twists and turns, and even the grumpiness it causes us, is loved by God, that God even sees it as holy, that God has even joined us in it. I wonder what it would mean for us to let some of that love in, as we lean into the places we are growing and changing right now. God sees you, and me, in all the ways that we are emerging, all the ways that we are in progress, in our mushy stressed out brains and lack of antecedents and when we cry when all the blocks fall down around us, and God loves us in all of that, and God joins us in it.

Perhaps this week at the beginning of the year is the week to just accept that loving gift of grace from a God who comes to join us in all the ways we are learning and emerging. Accept that grace for ourselves, and accept it for our congregation, as we go through this time of so much transition and uncertainty and newness. God is with us in this. God loves us as we go through it. God has given us a gift, and a vocation, that we are still discovering, that is still emerging, and will give us all that is necessary to be about God’s things in the world. When the blocks fall down, when the words and meaning to those big questions of life only emerge on bits of sticky notes if they emerge at all, God is there, loving us in it all.

Image by Dorothée QUENNESSON from Pixabay