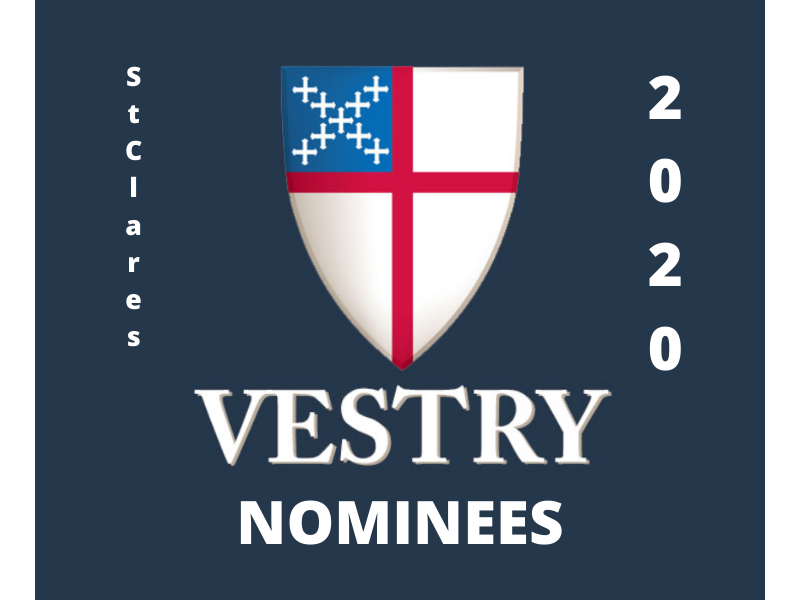 The Vestry is pleased to present the nominees for election to St. Clare’s 2020 Vestry. Below are the five candidates for five positions, four three-year terms, and one two-year term. Outgoing and continuing Vestry members are listed below.

Candidates for a Three-Year Term

CHRISTINE COOK — Christine Cook is a PhD Candidate in history at Wayne State University. Before this foray into the academic world, she served for 30 years with the US Army, retiring as a colonel from the US Army Reserves. She has lived in Ann Arbor for nearly 30 years, and joined the St. Clare’s community soon after moving here. She has served on the Altar Guild, been a choir parent, served on the Vestry, and currently she helps to lead the Youth Group. Last year, she served as one of the delegates to the Diocesan Convention, and in that role, she had the opportunity to vote for the new bishop. She is married to Ken Cook, who is currently serving on the Vestry and as a Genesis Liaison, and has two children, D’Arcy and Paul, who are now grown young adults.

ELIZA NUXOLL — I have been a member of St. Clare’s since the summer of 2014, shortly after my family and I moved to Michigan. After ten years in the Army, my husband Sam and I were ready to put down roots with our children, Genevieve (10), Anna (8), and Teddy (6); we soon found ourselves blooming in Ann Arbor. St. Clare’s was the first church we visited. As a lifelong Episcopalian, I was drawn to its inclusive liturgy, affective music, and the Genesis partnership. As a mother and early childhood educator, I was drawn to the welcoming atmosphere, vibrant children’s program, and intergenerational community. In the five years since, I have served the children and families of St. Clare’s in several capacities: first as a church school teacher and nursery host, and later as the leader of StorySong and
a member of the search committee for our Children’s Minister. Moving forward, I hope to serve on St. Clare’s vestry where I can provide a valuable perspective, from personal and professional experience, and a vision for the future of St. Clare’s and its families.

JULIA SMITH — Hi! I’m Julia Smith and I’m running for vestry. I grew up in South Carolina where I went to
school for psychology and intercultural studies. I moved to New York in 2016 for my MA and to Ann Arbor in 2018 to pursue a PhD in social psychology. Since then, I have loved getting to know the members at St. Clare’s and being a part of this supportive, worshipful, and vibrant community. I grew up in the Baptist church and participated in a Presbyterian college ministry as an undergraduate, and both of these faith communities have played a big role in my life and relationship with God. However, when I began to look for a new church after graduating in 2015, I hoped to find a church that was more inclusive for women and LGBT+ people and more engaged in interfaith cooperation. I found this in the (then recently excommunicated) Episcopal church and perhaps nowhere more than St. Clare’s. I’m running for vestry because I would like to become more involved in the work that St. Clare’s is doing and to give back to this congregation that has been so welcoming to me.

JENNIFER WOLF — I have been attending services at St. Clare’s for just over one year. I continue to be impressed by the warmth, joy, and caring witnessed throughout activities offered within or hosted by the church. Participating in the advent workshops, Christmas Eve Community Luncheon, Whole Bible Study, Crop Walk, and ushering have offered me a chance to get to know some of you better over the last 12 months, and I am grateful. If elected to Vestry, I hope to contribute to St. Clare’s with a skill set that includes market research and strategies for sustainable behavior change, project management, mediation, and instructional services relating to the fine arts and environmental stewardship. I am
thrilled to be a part of the St. Clare’s community and look forward to participating and contributing in a variety of ways, be it on Vestry or otherwise. See you on Sunday!

Candidate for a Two-Year Term

EDWARD HAPP — Edward Happ is an Executive Fellow at the University of Michigan, School of Information, where he is teaching and conducting research with his students. He is the former senior warden of St. Francis Episcopal Church in Stamford, CT, where he served on the vestry for 8 years; he was also Treasurer and Chairman of the Building Committee. During his tenure, St. Francis built a new church, the first new church in the Episcopal Diocese of CT in over 30 years. He also co-led the vestry during the time our priest’s long-term partner died of AIDS. He is the former CIO at the International Red Cross/Red Crescent in Geneva and also of Save the Children in the US and UK. He is the Co-founder, former Chairman, and a Leadership Fellow of NetHope, a twenty-year old US based consortium of leading international relief, development and conservation nonprofits focused on ICT and collaboration. Ed is a poet of over 50 years, co- founder of Connecticut’s first online literary magazine, and most enjoys reading on Sundays and in literary venues. He enjoys other people’s pets…from a distance . Ed has been a resident of Ann Arbor for three years and a member of St. Clare’s for two years plus. He is married to
Shirley Chen, who has been his partner extraordinaire for the past eleven years. He has four children, five grandchildren, and—though hard to believe—two great-grandchildren, all of whom are a source of great joy.

Thanks to the outgoing Vestry members:

Photos of all 2019 Vestry members can be found on our Lay Leadership webpage.