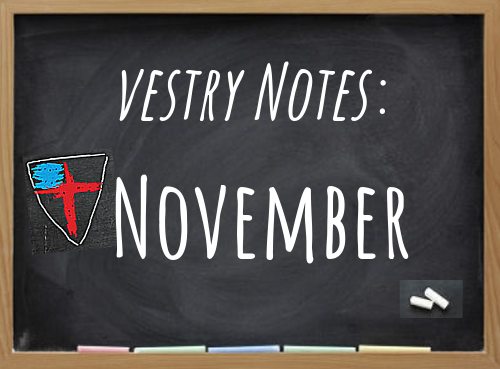 Vestry – is it for You? The Vestry established a nominating committee to fill five upcoming vacancies among the twelve members. Martin Haggestad, Joanne Heaton, Ken Cook and Knut Hill have completed their three-year terms. Lisbee Collins-Wildman, having served one year of her three-year term, finds herself called to the west side of the state and therefore unable to complete her term. A nominating committee of Haggestad, Heaton, Cook, Hill and Junior Warden, Kathy Daly, is looking for members of the congregation to fill the five vacancies (four three-year terms, and one two year term). The Vestry hopes to propose a full slate soon ahead of the election at the 2020 Annual Meeting of the Congregation in January. If you would like to be directly involved in the operations of the church, contact one of the nominating committee members.

Bylaw or not By Law? An ad hoc committee is currently assembled to review the St. Clare bylaws. The Episcopal Church is what is known as a “hierarchical” church in that each parish holds its assets in trust for its diocese which, likewise, holds its assets in trust for The Episcopal Church (yes, the “T” in “The” is intentionally upper case). As a consequence, the constitution and canons (legislative acts) of The Episcopal Church govern dioceses and congregations. Similarly, the constitution and canons of the diocese govern the congregations within the diocese. Thus, the governance documents of each parish must be in compliance with the constitutions of The Episcopal Church and the diocese. The ad hoc committee will assure that our bylaws are in compliance with the superior documents and to reserve to the Vestry those decisions which are within its prerogative. Look for a draft bylaw revision sometime in the spring followed by a short (we hope) membership meeting to adopt the changes in April or May.

CAT Got Our Tongues? The CAT Survey was launched to solicit feedback from all members. The goal is to determine our church’s current state and help find our future path. Reminders are being communicated regularly and alternate ways to take the survey are offered. The length of time that the survey is open may be extended past Dec. 1 to achieve a higher percentage of participation.