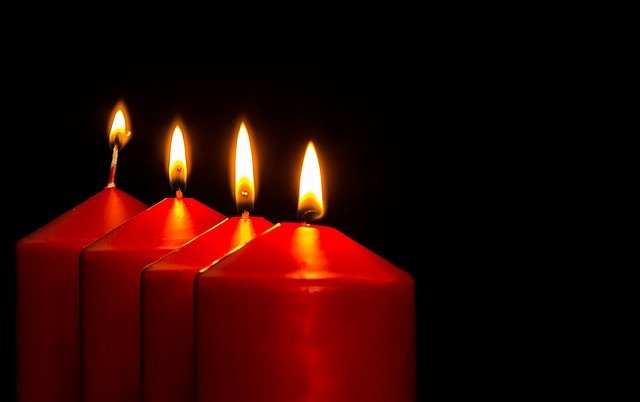 Several years ago, I was driving with my friend Betsey to a conference we were leading when we worked together for the diocese of Northern California. We were driving along a road at the north end of the San Francisco Bay that goes right along the water for many miles- you almost feel like you are driving right on top of the water. Betsey and I were talking about something, when suddenly we stopped talking, having noticed a big group of starlings flying together. They were like a cloud of birds, and they seemed to move as one. We were driving fast- probably 50 or 55 miles an hour, but we were just barely keeping pace with the birds. The cloud of birds continued to fly together- up and down, expanding and contracting, twisting around in beautiful configurations, at times skimming near the water, at other times flying high. Betsey and I drove along the water, occasionally interrupting the silence to wonder at what we were seeing. After about 10 minutes, our paths diverged. The birds went their way, and we drove on. It was one of the most amazing things I’ve ever seen.

Neither of us knew at the time what we were seeing, although I’ve since looked it up, and learned that such a group of birds is called a murmuration. It’s become for me one of those phenomena in God’s creation that has helped me understand human community more fully. One of my teachers in this was adrienne maree brown, who wrote the book Emergent Strategy. She says of murmurations:

My dream is a movement with such deep trust that we move as a murmuration, the way groups of starlings billow, dive, spin, dance collectively through he air—to avoid predators, and, it also seems, to pass time in the most beautiful way possible…

Here’s now it works: each creature is tuned in to its neighbors, the creatures right around it in the formation…There is a right relationship, a right distance between them—too close and they crash, too far away and they can’t feel the micro-adaptations of the other bodies. Each creature is shifting direction, speed, and proximity based on the information of the other creatures’ bodies.

There is a deep trust to this: to lift because the birds around you are lifting, to live based on your collective real-time adaptations. In this way, thousands of birds or fish or bees can move together, each empowered with basic rules and a vision to live. Imagine our movements cultivating this type of trust and depth with each other, having strategic flocking in our playbooks.

I thought of murmurations today for two reasons. One, I spent the last 3 days being a part of my old friend Betsey’s consecration as the new bishop of Iowa. We left Northern California at the same time this fall to embark on different new adventures, and she has been finding her place in her new flock in the same way I have here.

And secondly, I have been thinking about Mary and Elizabeth’s recognition of each other in the Scripture today, what happens when they come close to each other, each having experienced something miraculous.

We heard about Zechariah’s story two weeks ago, and last week we reflected on Zechariah and Elizabeth’s radical son once he was all grown up- John the Baptist. But today we return to Zechariah and Elizabeth, before John was born. An angel has come to Mary and told her that she will be the mother to Jesus, and that Elizabeth is also expecting a child. Both of these things are unexpected, even impossible news- not how things usually work. And so, we hear today, that, after the angel brings her this message, that Mary rushes to visit Elizabeth, her relative.

As I was studying this passage, I wondered what was important about that encounter between Mary and Elizabeth, and what about it prompted this clear and beautiful song from Mary, an essential text of our faith if ever there was one. Because Mary’s beautiful response to this Good News, and to her encounter with Elizabeth, is to sing this song affirming the character of God- God who is full of mercy, who is on the side of the poor, who keeps promises, who turns injustice on its head. God who is here to make things radically, impossibly, right.

And that’s where the murmuration comes in. Mary and Elizabeth come into proximity to one another, and they recognize the miraculous experience that they are both having, in one another. And in this moment of recognition, they both seem to all of a sudden understand that they are part of something larger than they had thought. Elizabeth, previously, the Scripture says, had thought that the miracle she was experiencing was a personal one- one that meant that she was no longer dealing with the difficulty of being a childless woman in her community. But she recognizes, through the proximity of Mary, through the recognition of a similarly impossible thing going on in Mary’s life, that this miracle was greater than her own personal joy.

And Mary, in response, sings her song, recognizing her place in the history of salvation, recognizing that she is joining in God’s work in this incredible way.

Without coming together to share this miraculous and even scandalous bit of impossible news, perhaps neither Mary nor Elizabeth could have fully understood their story, their place in God’s story. Being a part of the other woman’s story helps each of them enter fully into their own, to understand their place in the greatness of the whole thing that God was doing.

And isn’t that how it can be in our lives? So often, it isn’t until we recognize something in another person, that we understand it in ourselves. Realizing that we aren’t the only one going through something can help us give words to our own experience. And of course, that connects us to the reality that we aren’t alone- that there is something greater than us, guiding us, present with us.

The starlings seem to have a deep knowledge that they are part of something greater, of recognizing their common direction, even though they don’t have the perspective, as they are flying, to understand the whole picture. They experience it through their attunement to the birds right around them, somehow. Connected to others on all sides, but also with space to fly

with their own wings. Somehow, in that way, they are able to travel together, with strength, with beauty.

I have noticed that kind of balance here over the last few weeks. There is a really beautiful order to your life together- strong relationships, tested over time and lots of adversity. There’s a respect for each person’s uniqueness, and a sense that each one is necessary to fly as a community, to do something good and beautiful, to follow a call that is bigger than any of us could imagine on our own. It’s been wonderful and exciting to enter into that three dimensional dance here, with others who really do want to fly where God calls us together in a beautiful way.

And you all, and now me with you, are doing that in a time of tremendous change- you can imagine a great wind coming up and shifting our course. I mean, maybe to make the metaphor work, there would have to be like 10 times a wind came up and shifted our course- variants and case counts and Zoom software updates and coup attempts and weather and all we’ve learned and adapted to in this time. We haven’t been able to all bring our bodies together in the same way, to sing with full voice, to share a meal all together- all the things that we used to do to remind us that we are one.

But even in the vast changes of this time, I don’t think the basic principles have changed. Like Mary and Elizabeth, we are called to recognize the miraculous gifts in each other, to see God’s work in each other and be reminded again and again that God is working in each of us. We’re called to go to each other and invite each other in so that we can understand better together what God is doing in our midst. We’re called to hope that God can do a new, even an impossible, work in us. Like the birds, flocking together for protection and progress and beauty, we’re called to go together, joined in trust, and love, a part of a movement much bigger than ourselves. It’s good news, because we don’t have to journey alone, even in these times of great changes and struggles. We’re a part of a larger life, a larger call, that we get to follow together.