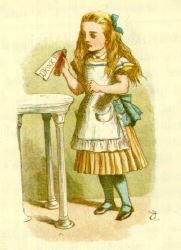 For my book club, I recently read “The Annotated Alice”, an edition of “Alice’s Adventures in Wonderland” with an introduction and notes by Martin Gardner.  The original 1865 Alice  was a story told by Charles Dodgson to the 3 Liddell sisters, and featured the middle daughter, Alice.

The story is a nonsense composition full of parodies of jokes and rhymes that were well known to British readers at that time, for which Gardener provides the originals in his annotations.

One of these comic verses, is by the Duchess, a character Alice meets in Wonderland:

Speak roughly to your little boy,

And beat him when he sneezes:

He only does it to annoy,

Because he knows it teases.

Gardiner says that this is a parody of a “happily unremembered” poem, Speak Gently, attributed to David Bates, a work that children of the 19th century were expected to memorize for their moral edification.

But I find the original poem one that we might, in this era of incivility, still benefit from and I present it here for contemplation.

Speak gently! It is better far
To rule by love than fear;
Speak gently; let no harsh words mar
The good we might do here!

Speak gently to the little child!
Its love be sure to gain;
Teach it accents soft and mild;
It may not long remain.

Speak gently to the young, for they
Will have enough to bear;
Pass through this life as best they may,
‘Tis full of anxious care!

Speak gently to the aged one,
Grieve not the care-worn heart;
Whose sands of life are nearly run,
Let such in peace depart!

Speak gently to the erring; know
They may have toiled in vain;
Perchance unkindness made them so;
Oh, win them back again!